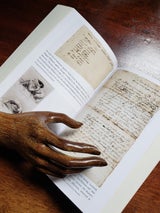 The panic began in 1692, over a raw Massachusetts winter, when a minister's neice began to writhe and roar. It spread quickly- as neighbors accused neighbors, husbands accused wives, parents and children one another. It ended less than a year later, but not before nineteen men and women had been hanged.

Drawing masterfully on the archives of the Salem witch trials, Stacy Schiff makes palpably real for us one of the most electrifying chapters in American History. She illuminates the demands of a rigorous faith and the vulnerability of the settlements adrift from the mother country, perched on the edge of a "remote, rocky, barren, bushy, wild-woody wilderness"

The Witches, Suspicion, Betrayal, and Hysteria in 1692 Salem brings early American anxieties to the fore and aligns them brilliantly with out own. In an era of religious provocations, crowdsourcing, and invisibly enemies, this enthralling story makes more sense than ever.